Since the 1600s the deer field has been a pasture land belonging to the Gripsholm Royal Farm. Today it is a nature reservation with hundred fallow deer.

In the 1860's King Karl XV redeveloped Hjorthagen as a park for walking and keeping animals.

Hjorthagen was developed into a deer pasture in 1890 in order to accommodate deer from the Royal Hunting Area Hjorthagen close to Värtahamnen in Stockholm.

Today, the entire reserve is used as pasture grounds for approximately one hundred fallow deer.

The area is a very popular are for country rambles both for the locals and for the great number of tourists that visit Gripsholm Castle each year.

Also found in the area are the vestiges of an ancient castle, a grave-field, an order emblem in cast iron as well as old walkways and ruins. The area covers approximately 150,000 acres.

The most important biological heritage of the area includes its trees - above all the oak and lime trees. They provide an important ecosphere for many rare lichens, mushrooms and insects.

The Osmoderma eremita beetle is an extremely rare insect that is found only in a few places in the county.

Rare insects that have been observed include the Corticeus fasciatus, the Larca lata, the Lymexylon navale and the Pentaphyllus testaceus.

Today it is possible to wander freely at Hjorthagen and most probably see deer up close. 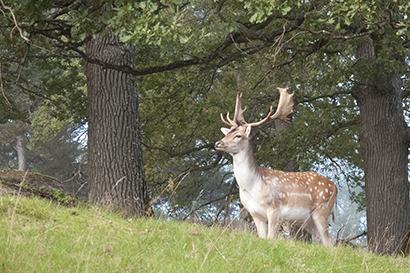 Around a hundred fallow deer roam in the reserve, which is also home to one of the county's finest eco parks. Photo: Hans Thorwid

Read more
A room fit for a princess

The rooms furnished by King Gustav III for his sister Princess Sofia Albertina at Gripsholm Castle are some of the castle's most beautifu...

The model for this year’s Portrait of Honour is the food profile and restaurateur Leif Mannerström. The portrait was produced by the phot...