The artist Evert Lundquist had his studio in the old machine house at the Chinese Pavilion. The studio is now a highly atmospheric museum with oil paintings, charcoal sketches and drypoint prints.

The machine house was used to generate electricity by steam engine to central heat the castle at the beginning of the 1900s. In the 1950s, when alternating current became the norm, the building was let as a studio to the artist Evert Lundquist who worked here between 1953 and 1992.

Today, the studio is a museum housing oil paintings, charcoal drawings and dry-point engravings of Evert Lundquist (1904–1994). It also houses oil paintings by Lundquist's wife Ebba Reutercrona, and works by their sons Manne and Hymme.

The building is a good example of Swedish Jugend industrial-type architecture from the early 1900s with its vaulted gable windows and rounded gables.

The studio is open for guided tours during the summer months, see Opening hours. 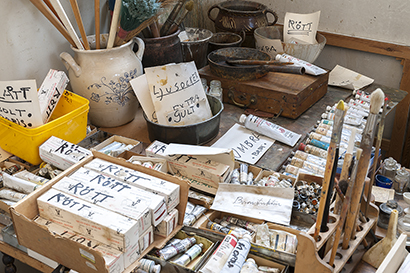 Evert Lundquist (1904-94) was a key figure in the history of modern Swedish art, both as an artist and as a teacher. Photo: Alexis Daflos//Royalpalaces.se

The dogs of Drottningholm

Nespelina, Don-Don and Turck are just three of the many dogs who have chased around Drottningholm's highly walkable park. Dogs have long ...

Had Hedvig Eleonora been less strong in character, it is very likely that the history of Sweden would have been entirely different. Drott...

During the mid-18th century, Drottningholm Palace was at the centre of intensive efforts to cultivate silk in Sweden. In 1753, Queen Lovi...