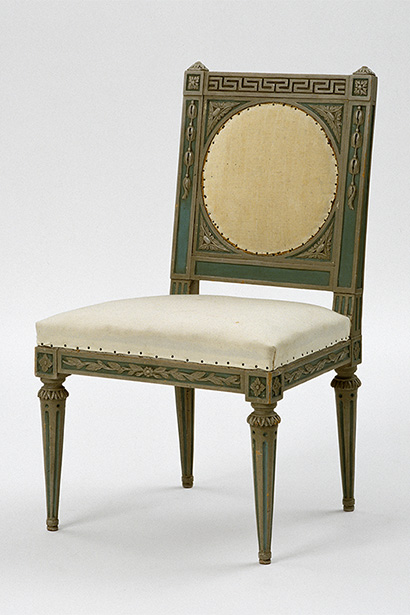 In the late 18th century, most of the rooms at Rosersberg Palace were redecorated to designs by Gustaf af Sillén. According to a memo by af Sillén, certain rooms – such as the duchess's bedchamber – were decorated to Duke Karl's own designs. Here, there are a number of unusual chairs that could be part of these designs.

Here is an unusual chair signed ILG (Johan Lindgren). Lindgren's speciality was drilled low relief. The shape of the chair's panels and legs can also be seen on a sofa at Rosersberg signed ILG, suggesting that they were part of the same set of furniture.

Birch, grey and green linseed oil pigment. Solid secondary stuffing on the seat and back covered with new coarse cotton.