West of the palace, towards Sigtuna Bay, is the English-style park laid out by Duke Karl (XIII). Other nearby sights include Sweden's largest tumuli and the Roman churches with their east-oriented towers in Norrsunda and Skånela.

The garden, commissioned by Count Bengt Oxenstierna, was considered one of Sweden's most lavish, at the time it was planted at the end of the 1600s by Nicodemus Tessin the Younger.

Today, much of the garden has overgrown or disappeared. However, it is still possible to wander through the 300 year old avenues and admire the 600 metre long pond, where once both swans and gondolas were found.

To the left of the palace towards the Sigtuna bay lies the English garden commissioned by Duke Karl (XIII) around the turn of the 19th century.

Here you can stroll down winding paths and find superb views of both land and water.

In the vicinity you can also visit one of Sweden´s largest burial-mounds belonging to the mystical King Nordian from the Era of the Great Migration.

The Romanesque churches from 1160- 1170 in neighbouring villages of Norrsunda and Skånela are also worthwhile visiting. They both share an unusual feature with towers to the east.

The park is open year round. 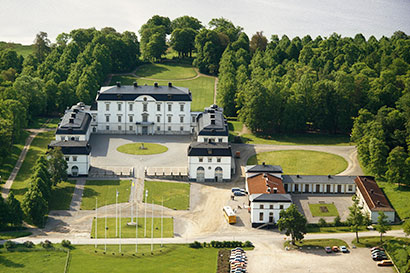 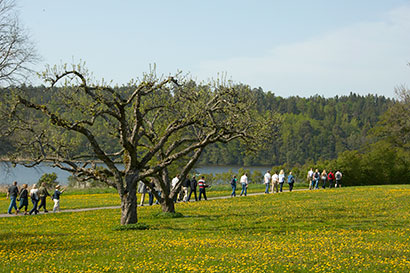 West of the palace, towards Sigtuna Bay, is the English-style park laid out by Duke Karl (XIII) around the turn of the 19th century. Photo: Alexis Daflos/Royalpalaces.se 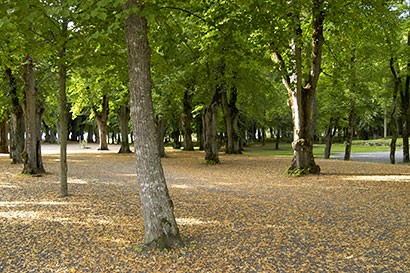 The avenues in the palace park are particularly beautiful in early autumn. Photo: Alexis Daflos/Royalpalaces.se

Visiting Rosersberg Palace is like stepping back into an authentic royal environment from the turn of the 19th century. The fittings have...

The palace chapel at Rosersberg Palace is located in the southeast wing of the building, and is particularly rich in history. The chapel ...

West of the palace, towards Sigtuna Bay, is the English-style park laid out by Duke Karl (XIII). Other nearby sights include Sweden's lar...

The Juno Wing and the terrace at Rosersberg Palace are home to a summer café serving sandwiches, coffee, pastries, cakes and ice creams.

Rosersberg got its name from the mother of the estate’s founder, Lord High Treasurer Gabriel Bengtsson Oxenstierna. His mother was descen...

America on the walls

A very early copy of the American Declaration of Independence hangs on a wall at Rosersberg Palace. Sweden was the first state outside th...

Read more
A witness of her time: Hedvig Elisabeth Charlotta

Throughout her adult life, Hedvig Elisabeth Charlotta found herself close to the centre of power. First as a duchess and the sister-in-la...

Read more
Information due to the pandemic