Up until 2006, Wondrak Couture was tucked away just behind Buckingham Palace in London's Belgravia. Here, designer Elizabeth Wondrak created 29 Nobel dress and many other garments for parties and official duties for Princess Lilian.

In her studio on Little Chester Street, she had a tailor's dummy with the princess's exact measurements. These measurements did not need to be changed at all during the many years of creative partnership between the princess and her dressmaker. Sketches and fabric samples were sent back and forth between London and Stockholm. The signs in the digital exhibition feature Wondrak's watercolour sketches of the garments included in the exhibition.

Elizabeth Wondrak was not guided by changing fashions, but by the princess's "silhouette and personality". She believed that there was a typical "Lilian look" – a soft and feminine elegance with classic characteristics. Throughout the years, sketches and fabric samples were sent back and forth between London and Stockholm. Elizabeth Wondrak died at her home in London in 2006, aged 78.

Below is a selection of the princess's clothes that were included in the exhibition. More garments can be seen in the digital tour. 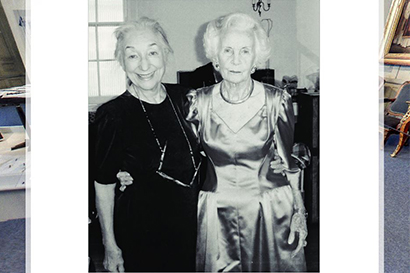 It was the princess's designer who coined the expression 'The Lilian Look'. Their cooperation over the course of many years suggests a close, informal relationship. The image shows a screenshot from the digital exhibition, in which all the signs can be clicked and read. Click on the image to view the digital exhibition.

"The princess's wardrobe is quintessentially British – her garments are timeless, exquisitely tailored and made from high-class materials. She was a Welsh rose on Swedish soil. Her lead designer, London-based Elizabeth Wondrak, ensured that her sartorial style was elegant, comfortable and appropriate for both the occasion and the circumstances. Sketches and fabric samples were sent back and forth across the North Sea for inspiration, approval and – occasionally – rejection. The sketch materials are highly personal. The model in the sketches is Princess Lilian herself, and the comments from both the designer and the client suggest a close, informal relationship. The princess's sartorial style communicated – not by being outspoken or challenging, but by being dignified and well considered – her role as a princess, and her position within the Royal Family as the wife of The King's uncle, Prince Bertil."

Margareta Nisser-Dalman, Director of the Royal Collections and exhibition curator. From the exhibition catalogue.