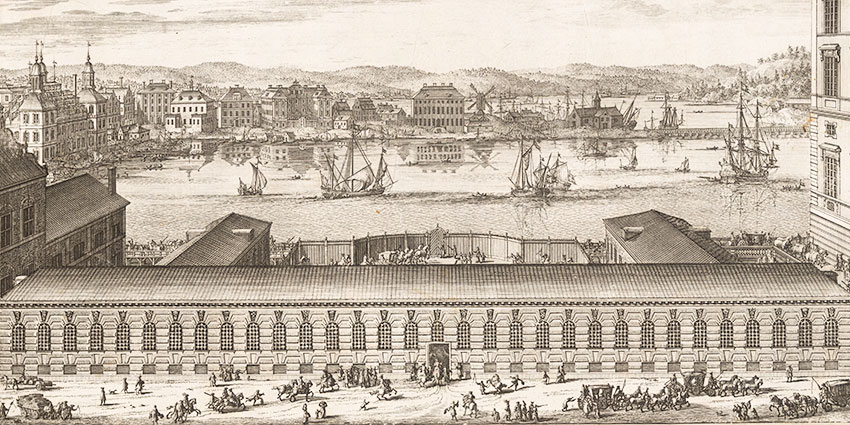 The Royal Stables: A history

The Royal Stables are located at Väpnargatan 1, right at the beginning of Stockholm's Strandvägen. The Royal Stables have existed since the time of King Gustav Vasa. Today, horses and carriages are used in connection with state visits, the opening of the Parliamentary Session and when The King receives new ambassadors.

The history of the Royal Stables stretches back hundreds of years to when King Gustav Vasa had stables built for the royal horses in 1535. Then, as now, the main role of the Royal Stables was to meet the king's transportation needs for both everyday purposes and special occasions. Noble horses and majestic carriages have always added to the splendour of the monarch and royal power.

The first Royal Stables were built on the island of Helgeandsholmen, very close to the Tre Kronor Palace and on the site where the Riksdag building stands today. These stables soon proved to be too small, and new stables were built towards the end of the 16th century at St Jakob's Church, where the Royal Swedish Opera now stands.

The devastating fire of 1696

Despite the fact that extensive plans to relocate and expand the Royal Stables were drawn up by both King Gustav II Adolf and Queen Kristina, it was not until King Karl XI commissioned Nicodemus Tessin the Elder to build magnificent new stables on Helgeandsholmen that they were finally moved. These stables had room for 60 horses, as well as a manège, a coach hall and an armoury. Unfortunately, the stables were destroyed by fire in 1696, the year before the dramatic blaze at the Tre Kronor Palace.

Tessin the Younger takes over

The task of building new stables on the existing site now passed to Nicodemus Tessin the Younger. The stables were modernised and became more palatial, with room for 150 horses. A pumping system enabled water from Strömmen to be led directly to each stall. Two wings were built to house a manège and a coach house. For almost two hundred years, this building served as the Royal Stables.

In the 1870s, proposals were put forward to construct two state buildings – the Riksdag building and the Riksbank central bank – on Helgeandsholmen. King Oskar II offered to vacate Helgeandsholmen free of charge if another suitable location could be provided for the Royal Stables. In 1888, the Riksdag made more than a million kronor available for the construction of the new Royal Stables at the current location of Artilleriplan at the beginning of Strandvägen, which now has the address Väpnargatan 1.

The architect was palace official Ernst Jacobsson. He was assisted by Fritz Eckert, and together they designed the Royal Stables in the form of a mediaeval fortress, a castle-like creation with towers and walls surrounding a grand stableyard. In 1894, the new Royal Stables were completed. The building aroused strong negative reactions, and was one of the most widely criticised buildings of its time.

Today, this coherent building is an irreplaceable cultural environment that still fulfils its duties as a provider of royal transportation. The number of horses has reduced significantly since the 1890s, as most transportation takes place by car, but it retains the role of preserving the elegant art of riding and maintaining the culture of the royal equipage.

In addition to meeting The King's transportation needs, the Royal Stables have had – and still have – important symbolic value, which is underscored by monarchs throughout history having shown a strong personal commitment to the Royal Stables' functions, equipment and equestrian care, and by the nation's leading architects having been engaged to design and construct the various buildings.

The Royal Stables were traditionally a male-dominated environment. King Carl XVI Gustaf's interest in the work of the Royal Stables has also resulted in it becoming an equal organisation that increasingly shows a strong environmental awareness.

Today's strict requirements in terms of security and efficiency have also lead to the introduction of an operational management system for planning, carrying out and evaluating the Royal Stables' transportation duties.

Copperplate engraving of the Royal Stables by the draftsman Erik Dahlbergh, from the folio Suecia antiqua et hodierna. Photo: The Royal Library 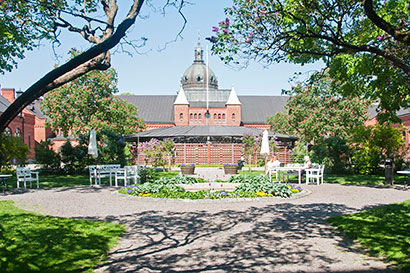 The inner courtyard of the Royal Stables. The Royal Stables represent a significant cultural asset in the form of the classic art of riding and the culture of the royal equipage. Photo: Sanna Argus Tirén 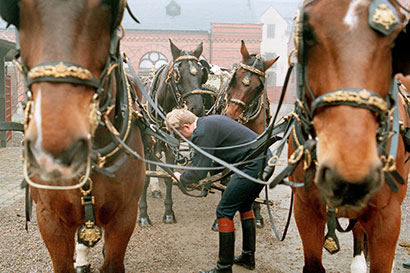 Horses and carriages are used on ceremonial occasions such as state visits, the opening of the Parliamentary Session and when The King receives new ambassadors. Photo: Alexis Daflos 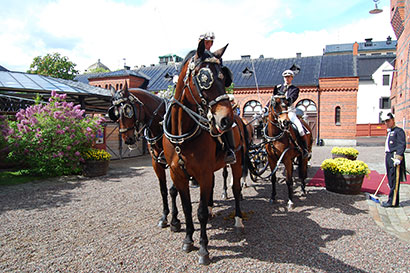 In 1894, the new Royal Stables were completed. The building aroused strong negative reactions, and was one of the most widely criticised buildings of its time. Photo: Anna Östergren 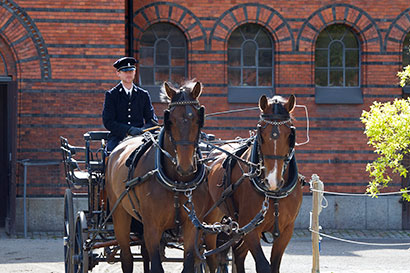 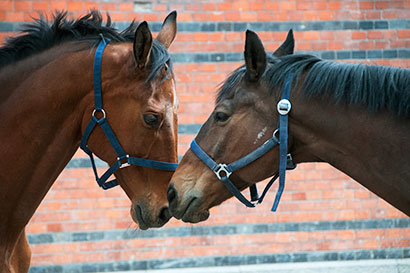 King Carl XVI Gustaf's interest in the work of the Royal Stables has resulted in it becoming an equal organisation that increasingly shows a strong environmental awareness. Photo: Sanna Argus Tirén 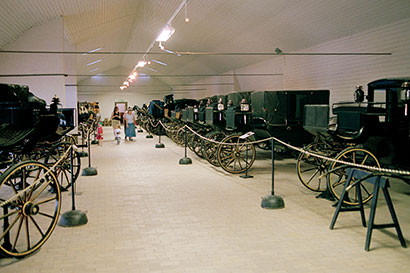 The role of the Royal Stables is to maintain and develop this heritage, and to show it to the public. Visitors are welcome all year round to see the carriages, the stables and the harnesses. Photo: Alexis Daflos

Take a tour through the Royal Stables, with its harness room, cars and carriage houses. During the summer season, the inner courtyard, it...

What was life like at the Royal Stables during the times of King Karl XIV Johan and King Oskar I? An exhibition in the coach shed describ...