The "Tyllegarn" estate is already mentioned in medieval documents, but the first Palace only built in the late 16th century, for Count Carl Sture.

The old Renaissance Palace was pulled down in about 1720 and replaced with the present building, designed by the French fortification officer Joseph Gabriel Destain for the then owner, Count Magnus Julius De la Gardie.

In the 1770s the Palace was acquired by the State for Gustav III's youngest brother, Duke Fredrik Adolf.

He embarked on a radical rebuilding of the Palace in the 1780s, when the wings were raised one storey higher and the whole building was given a new, modern flat Italian roof.

Duke Fredrik Adolf's interiors at Tullgarn, for instance the Red Antechamber and the Great and Lesser Bedchamb-ers, are among the finest of their kind in Sweden.

Many interiors were modernized at that time. The Great Breakfast Room, fitted out in virtually South-German Renaissance style, is a typical example.

Watercolour of Tullgarn Palace by C G Ulfsparre. From "Lettres à mes Amis sur Tullgarn", three letters written in the form of a tour of the park and the palace. Princess Sofia Albertina received the letters as a gift from her lady-in-waiting Ebba Oxenstierna af Eka & Lindö and Carl Gustaf Ulfsparre af Broxvik in 1827. Photo: Alexis Daflos/Royalpalaces.se

Alexander Roslin's portrait of Duke Fredrik Adolf. The duke commissioned some of Sweden's leading craftsmen and artists to work for him, including the brothers Louis and Jean Baptiste Masreliez, Per Ljung and Ernst Philip Thoman. Several of the interiors they created have been preserved in relatively untouched condition. Photo: Alexis Daflos/Royalpalaces.se 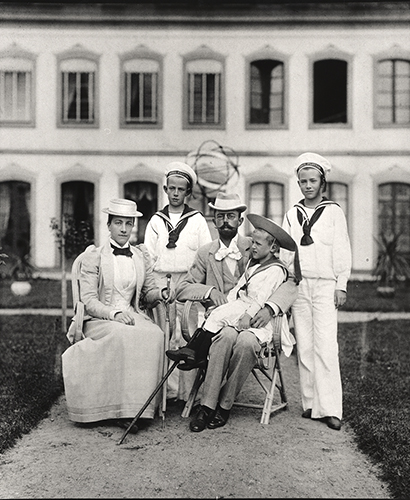 For larger groups we recommend a pre booked guided tour with your own guide. Tullgarn palace can be booked May–September.

Tullgarn Palace has been used regularly as a royal summer residence. Duke Fredrik Adolf, King Oskar I and Queen Josefina, and King Gustaf...

Strolling through Tullgarn Palace Park is like taking a walk from the 17th century through to the 20th century, from Carl Hårleman's aven...

Tullgarn Palace Park has an inn that houses a palace café and products from the Royal Gift Shop.

The "Tyllegarn" estate is already mentioned in medieval documents, but the first Palace only built in the late 16th century, for Count Ca...

The economic evolution. '200 years of Swedish History with the Bernadotte Dynasty' is a story told by Dick Harrison, Professor in history.

The development of democracy. '200 years of Swedish History with the Bernadotte Dynasty' is a story told by Dick Harrison, Professor in h...