In dark cellar vaults at the Royal Palace the Monarchy's most important symbols – the Regalia – are kept in safe-keeping. See fascinating and exclusive art, steeped in exciting history.

The Regalia are the symbolic objects that The King or Queen are presented with by the Archbishop on coronation day.

Several of The Princes and Princesses' crowns are also on view as well as the silver baptismal font from 1696, which is still used at royal baptisms.

It is this collection of invaluable objects that still nowadays is regarded as The King's regalia. This means that some of them are used today on ceremonial occasions such as coronations, christenings, weddings and funerals.

The country's most recent coronation was Oskar II's in 1873. When he died in 1907, his son and heir to the throne Gustaf V refrained from a coronation ceremony.

Since 1970, the State Regalia are now permanently exhibited in the Treasury at the Royal Palace.

Read about the crowns at our Archive

Read about the Queens crown 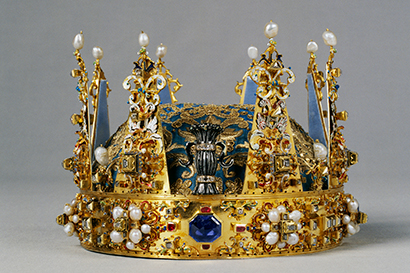 Karl (X) Gustav's Crown of the Heir Apparent with its blue cap. The crown was made in 1650 by Jürgen Dargeman. It is now The Crown Princess's crown. 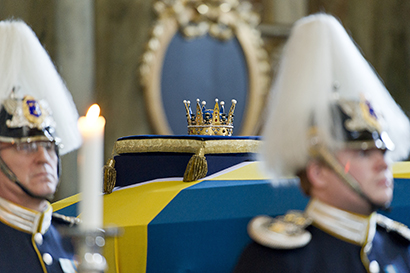 Princess Eugénie's Crown on a cushion at Princess Lilian's funeral.

The Swedish Regalia are kept in the cellar vaults of the Royal Palace of Stockholm. Here you can see crowns used by kings, queens, prince...

The major jubilee exhibition Vasa to Bernadotte, 1523 –1973 –2023. Culture in Service of the Realm will showcase unique objects, takin...

The Royal Apartments at the Palace is a collective name for the magnificent state rooms that are used at The King and Queen's receptions....

Discover the Hall of State at the Royal Palace in 360°. This room was the centre of Swedish power for centuries, and is still used for of...

This year is a double jubilee, marking 500 years since Gustav Vasa was elected king in 1523 – ushering in a new era that shaped modern Sw...

The Thinking Hand is a scholarship competition for young draftsmen, an annual collaboration between the Royal Court and the Royal Acade...