The Museum Three Crowns (Tre Kronor) is a museum dedicated to the original Tre Kronor Palace in Stockholm, which was destroyed in a violent fire in 1697.

OPENING OF THE PALACE, SUMMER 2021

Updates about the re-opening of the palaces, summer 2021, and steps made to ensure the visits complies with current restrictions due to covid-19.

As early as end of the 900s the Vikings built a wooden blockade on the spot where the palace is located today and by the 1100s a defence fort had been constructed.

Featuring objects that were rescued from the fire and newly created models, the museum depicts the Tre Kronor Palace's development from defence fort to the Renaissance palace of today.

The museum is located on the ground floor of the palace's northern wing, which is also the section which survived the fire the best. To access the museum you have to pass through the five-metre thick defence wall from the 1200s.

With the entrance ticket you can follow the Palace's history by a visit to the Royal Apartments. 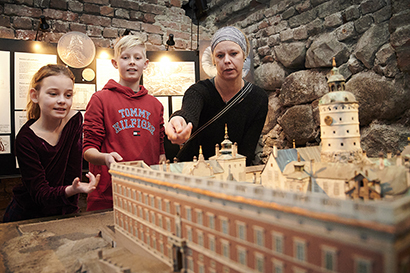 A large number of 3D models make up the more exciting and instructive part of the exhibition. Amongst these, three large replicas depict the castle's development from a medieval stronghold to a castle, which was on its way to transforming into a magnificent baroque castle before the palace fire in 1697. Photo: Michael Steinberg 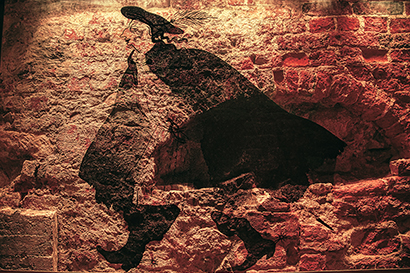 ”Grey cloak´s passage”. The passage through the wall was made in 1674. It is a part of the link between the palace and the Royal Stables on Helgeandsholmen. Karl XI, known as “Grey cloak” was able to make his way unseen by this route. Screen print from a drawing by Stina Wirsén. Photo: Michael Steinberg

"Now it's time to paint the old man!" This is how the artist Anders Zorn was greeted by King Oskar II when he arrived at the Royal Palace...