Haga Park is perhaps Sweden's foremost example of an English landscape park and also known as the “Gustavian Park" as it was initiated by Gustav III.

Haga Park is closely associated with King Gustav III, who had grand visions for the park – many of which never made it beyond the drawing board. However, a number of the King’s ideas could be turned into reality..

Haga Park has major influences from the ‘English style’, and architect Fredrik Magnus Piper had a huge influence on the design of the park.

This style of park emerged in England during the mid 18th century, and takes its inspiration from the natural environment, with softly formed lawns, called pelouses, interplayed with dark areas of woodland and semi-open pasture.

The style was inspired by ancient times, Italy and China, and is characterised by winding paths, arbours and magnificent trees.

Gustav III organised the building of the Echo Temple, the Turkish Kiosk, the Chinese Temple and the Copper Tents. He also created a pleasure palace in Haga Park that is today a highlight in Swedish art history – Gustav III’s pavilion (top image). 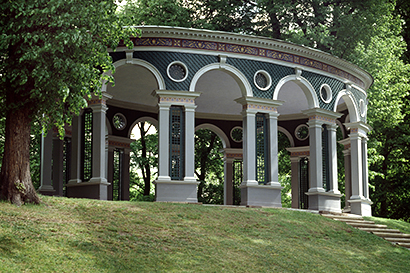 The Temple of the Echo was built in 1790 as an outdoor summer dining hall for royalty. Today it is an outdoor museum that is a very popular location for marriages. Photo: Royalpalaces.se

This building were part of the magnificent park created by Gustav III. The Chinese Pagoda is an open octagonal building with a tent roof decorated with a dragon head. Photo: Royalpalaces.se