In the summer of 1766, soon after they were married, the heir apparent, Gustav (III) and Sofia Magdalena rented Haga, a small property just outside the northern boundary of Stockholm.

Five years later, Gustav made the property his own. About ten years after that he also acquired the neighbouring property of Brahelund, thereby giving Haga more or less the boundaries it has today.

During his early years at Haga, Gustav III stayed in what is now the old corps de logis, still to be seen in the southern part of the park.

During the 1780s Gustav, aided by the architect Fredrik Magnus Piper, began transforming the park into a fashionable romantic landscape, known in Sweden as an "English Park".

Meandering paths, sudden vistas, and radically tamed scenery alternating with the grandeur of unspoiled nature are typical components of this landscaping.

A park of this kind also had to include a number and variety of buildings and pavilions, such as the Turkish Pavilion, which still survives at Old Haga.

In the mid-1780s, Gustav laid the foundation stone of a magnificent palace, which was planned as something of a museum.

In its grandly designed galleries, he wanted to display his great collection of antique Roman statues (now to be seen in Gustav III's Museum of Antiquities at the Royal Palace of Stockholm).

The "Museum Palace" at Haga was designed by the French architect and stage designer Louis Jean Desprez.

The ruins of Haga

Building work came to a standstill following the assassination of Gustav III in 1792. The cellars - all that ever got built - are known today as the ruins of Haga.

The corps de logis of the Brahelund estate, overlooking the shore of Brunnsviken, was rebuilt as Gustav had intended and became Gustav III's Pavilion at Haga.

The interior was decorated by Louis Masreliez in Pompeian style. Masreliez had studied for several years in Italy and was closely familiar with Roman antiquity.

The apartments of Gustav III's residence at Haga bear witness to the outstandingly high quality of Swedish neo-classical interior design.

Not only are the permanent fittings and decorations of the different rooms very well preserved, but also a great deal of the pavilion's original furniture is still in situ.

Internationally as well, Gustav III's Pavilion at Haga is one of the finest examples of European Neo-Classicism.

The "Queen's Pavilion", today better known as Haga Palace, where guests of the Swedish Government are accommodated, was built in the early years of the 19th century. Haga Park is now part of the world's first National City Park. 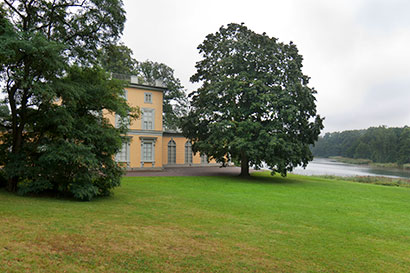 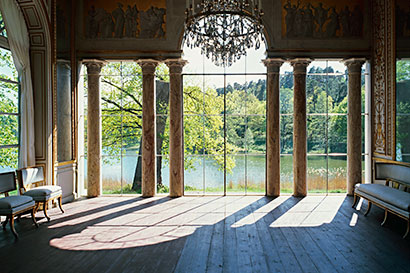 The Hall of Mirrors. The architect Olof Tempelman designed the pavilion in 1787, and the interior decoration was directed by Louis Masreliez. Photo: Jens Lindhe/Royalpalaces.se

In Sweden, the transition from Rococo to Gustavian style was a gradual development which, at the end of the century, culminated in Neocla...