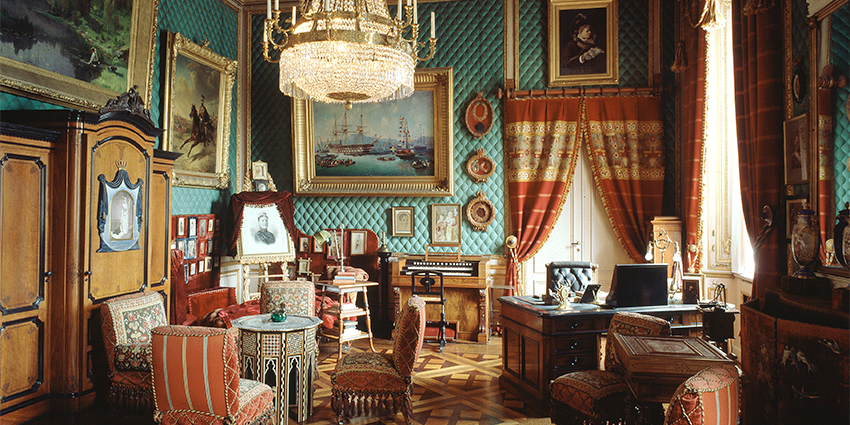 Revival styles, historicism and eclecticism. The 19th century was a time of many stylistic shifts. From Empire, via Revival styles and National Romantic, to Art Nouveau and Carl Larsson.

The language of form and changing fashions have evolved and left their impressions throughout the time of the Bernadotte Dynasty, from the time of King Karl XIV Johan through to the present day. At the Royal Palace, interiors have evolved, the functions and uses – and hence, the names – of rooms have changed, and new rooms have been added.

Following the French Revolution, new tones resounded across Europe, and conditions changed over the course of the century. The age of industrialism had become a reality. This was reflected in the interiors and the way rooms were used at the Royal Palace, as well as at the summer palaces, where conditions also changed to some extent.

The various historic eras were labelled during the 19th century, and decorating rooms in different historic styles became popular. Renaissance Revival, Gothic Revival, Rococo Revival and so on. Revival styles became fashionable, and remained popular long into the 20th century. Revival styles should not be seen as purely copying, and have their own stylistic expressions in which both forms and names have been borrowed from previous eras, but have been accentuated and combined to create new, distinct and independent stylistic forms.

The influence of the Empire style remained, but became softer in the form of Biedermeier, the Germanic name for the more middle-class version of the Empire style. The dark mahogany was replaced with lighter wood. Both furniture and interiors in light birch with contrasting details in blackened wood become popular.

Details of furniture, mirror frames and other items increasingly took on forms that pointed towards future so-called Revival styles. Turned chair legs replaced the Empire style's sabre-shaped legs, just as the pelta-shaped chair back was gradually replaced with softer lines. Softly rounded ornamentation was introduced, heralding the Rococo Revival style. The same shapes could also be seen combined with early hints of pointed arches, suggestive of the forthcoming Gothic Revival.

Wall panels, decorative details and furniture took on consistently thematic uniformity. However, there were no requirements corresponding to today's perceptions of what matches in terms of colour and texture. Patterns and materials could be combined in ways that would be surprising, if not downright unthinkable, in the mid-19th century and onwards.

Although technology evolved with the rise of industrialism, 19th century furniture was still very well made using high quality materials, with thick veneers, for example. The machine saw paved the way for mass production, and ordering furniture from a catalogue became possible in the 19th century. Towards the end of the century, electricity allowed for major changes, not least in terms of lighting. New types of light fitting were invented, some with the stated aim of emphasising the light bulb as a novelty.

Another technical innovation was the coil spring, which had already been used to improve seating comfort in carriages and was introduced in furniture manufacturing during the 1830s. Full upholstery became increasingly popular, and a few decades later wood had completely lost its function as a decorative surface. The role of veneer was replaced by the art of upholstery, with deep-stitched fabric that often covered the entire piece of furniture. Lace, tassels and fringes become very common decorative details in the 19th century, as did porcelain castors.

With new ceremonies, new habits and new social forms, rooms adopted new functions – and new names. The drawing room became the salon, and the word thus entered the language with its current meaning. There were also distinctions between feminine and masculine décor, and different revival styles were considered appropriate for different types of room.

Renaissance Revival and Gothic Revival were regarded as typically masculine styles, and were suitable for dining rooms and halls, while Rococo Revival was more feminine and was used for salons and bedrooms. The feminine boudoir style found its equivalent in the men's smoking room, which was decorated in Turkish divan style. When we think about interiors featuring kilim rugs and heavy draperies with lacework, we use the Danish term klunke (meaning "tassel”) style.

Not only did the 19th century bring new names for rooms, it also brought a need to display all the new mass-produced ornaments. Various shelving furniture was produced to meet this need, such as athèniennes and étagères, along with jardinières to display floral arrangements. Improvements in materials led to the production of cast iron furniture, just as technological developments had enabled bentwood chairs to be made, such as the famous Thonet chair.

Different styles overlapped and replaced each other during the late 19th century. Around the turn of the century, Sweden witnessed a craze for Nordic heritage, which was expressed as National Romanticism. Elsewhere in Europe, Art Nouveau – or Jugendstil, as it was known in German – emerged. Few – if any – traces of these styles remain at the Royal Palace today, but they are well represented elsewhere in Stockholm, for example at Prince Eugen's Waldemarsudde.

Typical characteristics of National Romanticism include authentic natural materials, ideally oak and granite, craftsmanship produced by hand in the rustic style (the Association of Friends of Textile Art was established in 1874), dragon loops and Viking-inspired decorative elements.

Jugendstil, or Art Nouveau, softened lines and shapes once again, with vegetative decorative elements returning to popularity. These were often richly ornamental and curvaceous, but were usually restricted to limited sections of furniture and building façades.

After an era of dark, heavy velvet curtains and densely furnished rooms, there was a desire to lighten things up, let in the light and air, pay homage to authentic natural materials and seek out the skills of genuine craftsmanship once again. As a reaction against the ideals of 19th century fashions and interior design and the mass production of industrialism, these ideas first emerged in England where they were represented by the Arts & Crafts movement. The magazine The Studio was read here in Sweden by husband and wife Carl and Karin Larsson, whose interior design ideal had such widespread appeal that it still characterises 'Swedish taste' to this day.

In keeping with the spirit of the age and the interest in different historical periods, King Karl XV not only created spatial settings at the Royal Palace, he also collected antiques and decorated Ulriksdal, which he bequeathed to the nation as a museum. At the time, an ancient atmosphere was considered more important than authenticity, with antiques and later props being mixed to create the desired effect. Today, some of these interiors remain and are among Sweden's few examples of the stylised historic environments of the 19th century. They can be seen in the summertime, when Ulriksdal Palace is open to visitors.

Our own era is represented in King Carl XVI Gustaf's Jubilee Room, decorated under the direction of Åke Axelsson. This entire room interior features pieces by contemporary artists and artisans.

Today, it is with respect for and knowledge of the ceremonies and usage of previous eras that the rooms and apartments at the Royal Palace are used while maintaining a sense of dignity and ceremony, but in accordance with the King's motto of "For Sweden – With the Times".

Top image: King Oskar II's Study at the Royal Palace was created in the 1870s, and embodies the ideal of the time – a cosy space filled with textiles, lots of furniture, ornaments and family portraits. The papier-mâché wall panels imitate button-studded fabric. Photo: Alexis Daflos/Royalpalaces.se 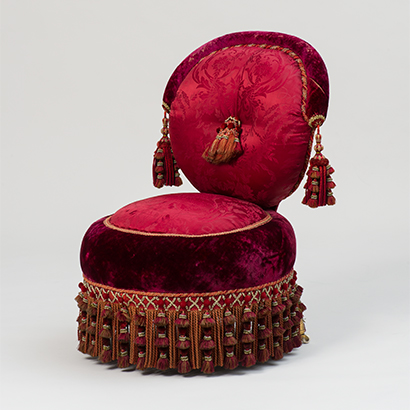 Queen Sofia (1836–1913) had the Royal Palace furnished with several seating groups and a number of semi-armchairs and easy chairs. It was at this time that the professionalism of upholsterers reached new heights. Seating comfort had improved considerably when coil springs were invented. Rich lacework was also added, so that the wooden framework could hardly be seen at all. It is often jokingly said that in prudish Victorian England, it was considered indecent to even see the legs of a chair. Photo: Alexis Daflos/Royalpalaces.se 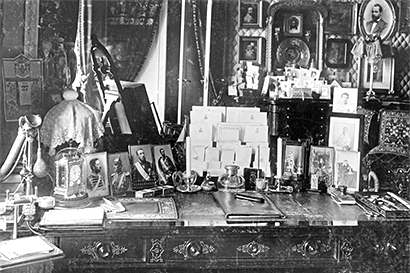 A palace with the times. New innovations and trends arrived at the Royal Palace first, before spreading to the rest of the country. King Oskar II's interest in technological innovations can be seen in his study at the Royal Palace, where a telephone and a desk lamp with a visible bulb take pride of place on the desk. 1897 photo from the Royal Photograph Collections. 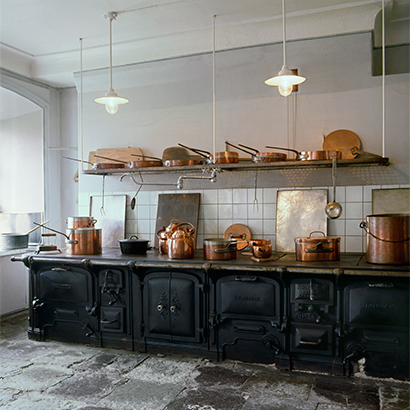 A modern kitchen. In 1881, Crown Prince Gustaf (V) married Princess Victoria of Baden, and Tullgarn Palace became their summer palace. Several of the palace's interiors remain from their time, in contrast to the many 18th century interiors. King Gustaf V had the palace kitchen modernised, with a stainless steel sink and taps, a water heater, a cold room, a heating shelf, a dumb waiter, a cutting machine and a coffee grinder. Photo: Alexis Daflos/Royalpalaces.se 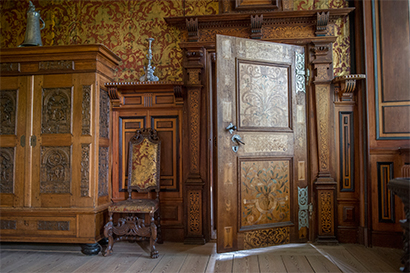 Historicism. Crown Prince Karl (XV) and Princess Lovisa actively collected furniture and handicrafts. When they took over Ulriksdal Palace in 1856, much of the palace was newly decorated in a historical romantic style. The Oxenstierna Room was decorated with Baroque elements. The doors date from the 1630s, and were donated to King Karl XV by the owner of Tidö Castle. Photo: Kate Gabor 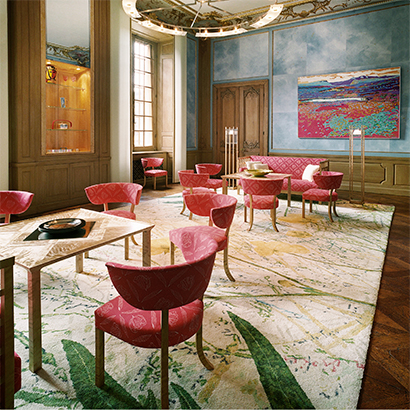 The 20th century. The Riksdag, the Government and the Swedish municipalities presented sketches for the décor of a room at the Royal Palace of Stockholm – King Carl XVI Gustaf's Jubilee Room – to commemorate The King's 25th jubilee in 1998. The theme for the room is 'a Swedish summer's day'. It is an excellent example of how well modern Swedish design works in an 18th century setting. Photo: Alexis Daflos/Royalpalaces.se

REVIVAL STYLES AT THE ROYAL PALACES

A HISTORY OF STYLE AT THE ROYAL PALACES

TYPICAL FEATURES OF THE 19TH CENTURY

The Revival styles of the 19th century are a collective name for the many different stylistic expressions that emerged during the century. These styles are characterised by drawing inspiration from earlier eras, combining their forms in new ways – sometimes strongly accentuated – and incorporating more recent details. Industrialism and technological developments during the century, economic conditions, supply and demand, political developments and local conditions such as access to materials and the suitability of the climate were decisive for the development of 19th century styles, and a process that continues even to the present day.