The Chinese Pavilion: A history

Out on Drottningholm stands a hidden gem ornamented with dragon heads, which was originally a birthday present from King Adolf Fredrik to Queen Lovisa. The Chinese Pavilion typifies Rococo style and the passion for chinoiserie that was all the rage in 18th century Europe.

Dragons, parrots and a dining room where the table rises up through the floor. There are plenty of exciting things to discover on the edge of Drottningholm Park. Here, surrounded by crisp chimes from brass bells and exuding exoticism, hides a true gem: the Chinese Pavilion, a birthday present to Queen Lovisa Ulrika from her husband, King Adolf Fredrik.

Dressed as a Chinese prince

This extravagant gift was handed over on 24 July 1753, the queen's 34th birthday, as the culmination of a day filled with festivities. In the evening, the king and the birthday girl wandered up towards the new pavilion, where the door opened and the seven-year-old Crown Prince Gustav emerged dressed as a Chinese prince, carrying the golden keys on a red velvet cushion.

A favourite of the royal family

It is clear from a letter she wrote to her mother that Queen Lovisa Ulrika appreciated her gift:

"If I was surprised by the exterior, I was no less surprised by the interior. Everything bore witness to the generosity and good taste of the man who had arranged it all. (…) In the wings, tables had been laid. On one was a magnificent porcelain service from Dresden, and on the other an East Indian service. When we had inspected all these fine things, the king put on a Chinese ballet accompanied by Janissary music."

The pavilion soon became a favourite of the royal family and somewhere they could escape the hustle and bustle of Drottningholm Palace. The original building was demolished in 1763, as it had been attacked by 'fungus', and was replaced by a new one designed by architect Carl Fredrik Adelcrantz. The new Chinese Pavilion featured bold colours and rich ornamentation, including stucco dragons.

The pavilion, which had been secretly built in prefabricated form in Stockholm and then transported to Drottningholm, elegantly combines the ideals of the Rococo era with the chinoiserie style that was fashionable in Europe at the time. The Chinese Pavilion was regarded as an exotic escape, where visitors encountered paradise-like depictions of Chinese life. The Red Room, the Embroidered Room, the Library and the Blue Salon are examples of exquisitely coloured rooms that are home to a wealth of Chinese craftsmanship, including porcelain, lacquerwork and silk.

Next to the Chinese Pavilion are some smaller buildings, also in a Chinese style. One of these is the Volière, with two red parrots sitting in the tower. Another is Confidencen, a dining building where the dinner table and the serving table were set on the floor below, ready to be hoisted up to the dining room when the signal was given. This allowed diners to eat without serving staff, so that especially confidential discussions would not be heard. 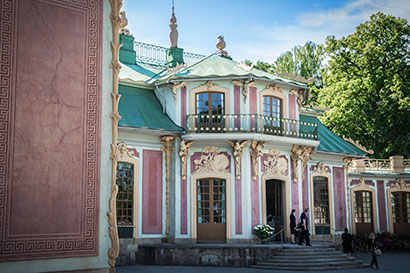 The Chinese Pavilion was built in prefabricated form in 1753, and was a gift to Queen Lovisa Ulrika from King Adolf Fredrik. Photo: Raphael Stecksén 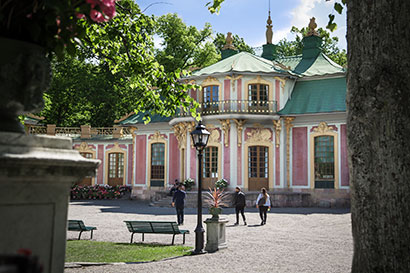 The Chinese Pavilion combines the European Rococo style with dreams of the exotic. During the 18th century, China was regarded as a land of wonder. Photo: Raphael Stecksén 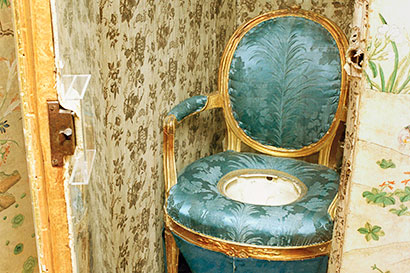 A Gustavian toilet in one of the small rooms on the top floor of the Chinese Pavilion. Photo: Alexis Daflos 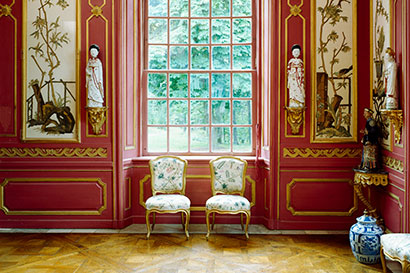 The Embroidered Room. The exquisitely coloured rooms are home to a wealth of Chinese craftsmanship, including porcelain, lacquerwork and silk. Photo: Alexis Daflos 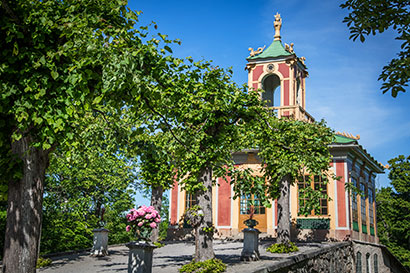 Confidencen is a dining building where the dinner table and the serving table were set on the floor below, ready to be hoisted up to the dining room when the signal was given. Photo: Raphael Stecksén 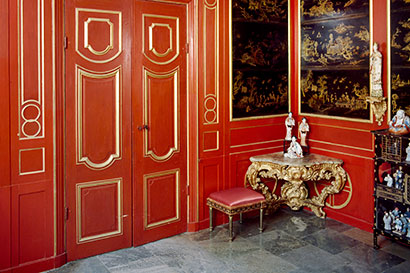 You can walk round the Chinese Pavilion yourself, but if you want to broaden your knowledge there are audio guides available. The audio ...

Discover more at The Chinese Pavilion

The rooms of the palace

The Chinese Pavilion was built in the middle of the 1700s, a period in European history when chinoiserie was the height of fashion. Today...

In Drottningholm Palace Park, close to the Chinese Pavilion, you will find the Pavilion Café. The café is open during the summer months.

A selection of products linked to the pavilion are available for sale at the Chinese Pavilion.

The first pavilion, a prefabricated building, was erected here in 1753 as a birthday present to Queen Lovisa Ulrika. It was built in a Ch...

The Chinese Pavilion: A history

Out on Drottningholm stands a hidden gem ornamented with dragon heads, which was originally a birthday present from King Adolf Fredrik to...

One July evening in 1753, Queen Lovisa Ulrika was surprised with a fantastic birthday present. In the far section of Drottningholm Palace...