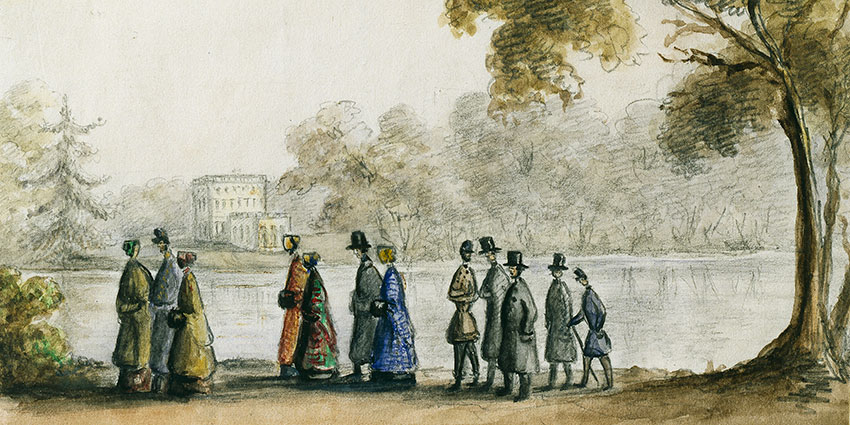 Haga bears witness to King Gustav III's yearning for a rural idyll and great luxury. The guests invited here by the king include the poet Carl Michael Bellman. His Epistle 64 includes the lines "The winged butterfly is seen at Haga, between the frost and down of mists".

An arbour lit up by many candles, a group of musicians who played, and a beautifully set supper table. This is some of what Crown Princess Sofia Magdalena found when she arrived at Haga on the evening of 3 July 1767.

Crown Prince Gustav had hired Haga to celebrate his wife's birthday, and had been planning to surprise her for a long time. On their way home from Ulriksdal, where her birthday had been officially celebrated, Crown Prince Gustav had his horse and carriage turn off towards Haga, where the road was illuminated by outdoor candles. Eventually, the party reached the abovementioned arbour, where supper had been set out for around twenty guests. A group of musicians played in the background. The food served included ham, pike, veal, lamb and venison, lemons, spinach, anchovies, smoked salmon, herrings, olives, carrots and chocolate.

Great luxury and a rural idyll

Haga was already well-known to King Gustav III in the 1760s, but the history of the park truly began in 1771 when the king bought the land that now makes up the southern part of Haga Park. The king, who had yearned for both simplicity and great luxury, had a dream about a rural idyll and a simple life far away from his duties. This dream was realised with the small wooden building that accompanied the land. This building was named Old Haga. The guests invited here included the poet Carl Michael Bellman, whose works include Epistle 64 with the line:

"The winged butterfly is seen at Haga, between the frost and down of mists."

"A small nest where one can hardly move."

Work began on remodelling part of the park in 1772. In contrast to Gripsholm, Ulriksdal and Drottningholm, where the king often spent several months at a time, Haga – with its proximity to the city – was a place where he could take day trips or stay for just a couple of days at a time. The existing yellow-painted wooden building had a certain charm, but it also had its limitations and King Gustav III began planning to construct a new building or at least extend the existing one. His sister-in-law, Duchess Hedvig Elisabet Charlotta, described it as:

"A small nest where one can hardly move. The entire building consists of only four small rooms on the lower floor and four small, low attic rooms. Although the king has arranged it very tastefully, it is still like a rat trap. The king's bedroom is so small that if he stretches out his arms, he can reach both doors on one side and the window and the opposite wall on the other."

It was not until 1781 that the still largely overgrown terrain started to be transformed into an English-style park by the landscape gardener Fredrik Magnus Piper. He had been trained in England, and was one of the most skilled landscape gardeners of his time. The intimate character of the park now became more magnificent, and with the acquisition of Brahelund in 1785 it doubled in size to the north. Work began on excavations, land in-fills, road laying and the planting of more than 25,000 trees. Undulating open lawns contrasted with groups of trees, hedges and ditches. A network of gently winding roads and paths criss-crossed the whole of the park. Channels were dug to create picturesque islands, and small temples, gazebos and monuments – such as the Temple of Echo, the Turkish Kiosk and the Chinese Pavilion – were constructed to catch the eye. The Copper Tents were erected for the guards.

A palace of enormous proportions

A large palace building of enormous proportions – what is now known as the Large Palace Foundations – was planned for entertaining and to house King Gustav III's collection of ancient sculptures. The foundation stone for the palace, designed by architect Louis Jean Desprez, was laid on 19 August 1786 on the anniversary of King Gustav III's first coup d'état in 1772, which was planned at Haga. The event was celebrated with a party that began with the king, the queen, the crown prince, the king's siblings and their companions walking to the hill where the palace was to be built. The spectators took their position on a stand, music was played and Vulcan, the god of fire and metalworking, came marching through the undergrowth to hammer the foundation stone. A play was then performed, in which the goddess of pleasure and the free arts promised to reside at the palace. After the play, the king laid the symbolic foundation stone which was also hammered by the queen, the crown prince, the duke, the duchess and those who had helped the king with the coup d'état fourteen years previously. Led by the park's protective goddess, who threw flowers into the path of the king, the group then walked down to the water where sloops decked out in flags waited to ferry them across to Old Haga. There, the seven-year-old crown prince met them as they disembarked with a few verses of poetry, but was so overwhelmed by the seriousness of the situation that he burst into tears and had difficulties making himself heard.

From 1788, Haga was the place where King Gustav III wanted to be, spending long periods here. It was during this time that secret meetings – councils of war – were held in the newly built Turkish Kiosk to plan the war of aggression against Russia. The war began after Midsummer 1788, and some of the prisoners of war held in Sweden were put to work in autumn 1788, building the palace at Haga. The war met with mounting opposition, the king's circle of friends grew smaller, and he increasingly sought the solitude of Haga. The war ended in autumn 1790, the same year that construction began on Gustav III's Pavilion, based on the old main building at Brahelund. Here, interiors were planned which today are among the finest surviving examples in Sweden from this period. Despite the fact that much of the decorating work remained to be done, King Gustav III moved in for Christmas 1790. During the spring of 1791, the Pavilion mostly served as the king's permanent home. He only really travelled to the city to attend to state business and for the opera. After an opera performance, it was common for King Gustav III to invite his guests to Haga for a late supper.

16 March 1792 was King Gustav III's last day at Haga. The previous evening, he had invited a small group to supper in the Pavilion during which discussions turned to the attempted assassination of King Joseph I of Portugal in 1758. The next morning, the king inspected the palace construction work and, when asked by the captain on guard Gustaf Löwenhielm when the palace would be finished, the king replied that he hoped to be able to move in in a few years' time, if he were to have a normal lifespan.

After venturing onto the ice at Brunnsviken to watch the sledge racing, he eventually headed off to the city to attend a masked ball at the Royal Swedish Opera, where Jacob Johan Anckarström was waiting for him with a loaded pistol.

King Gustav III was shot and badly injured, and was taken to the Royal Palace of Stockholm where he died thirteen days later.

Construction work at Haga ceased immediately, and many of the building materials that had been intended for the palace at Haga were taken to Karlberg instead, to be used for the barracks at the military academy.

Haga: a living environment to this day

However, Haga was not entirely forgotten. Here, next to the Pavilion, what is now Haga Palace was built as a home for King Gustav IV Adolf and his family. The building was designed by the architect Carl Christoffer Gjörwell, and was completed in 1805.

Even after King Gustav IV Adolf and his family were forced to leave Sweden in 1809, Haga continued to be a popular royal residence and destination.

During the 1930s and the 1940s, Haga Palace was home to Prince Gustaf Adolf, Princess Sibylla, their daughters Princesses Margaretha, Birgitta, Desirée and Christina, and their son Prince Carl Gustaf – our current king.

Since autumn 2010, Haga Palace has been the home of the Crown Princess Family. 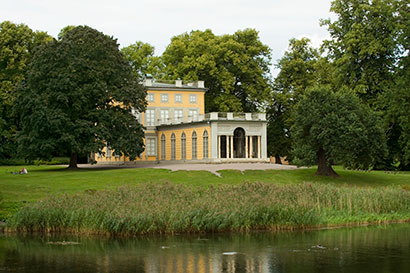 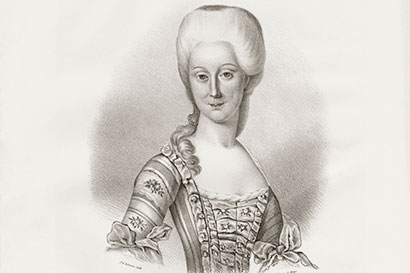 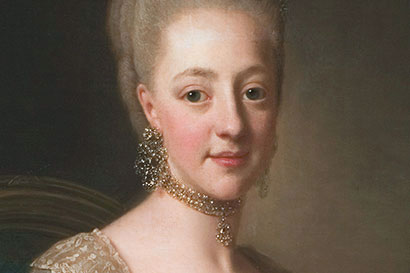 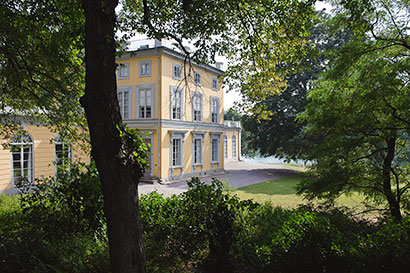 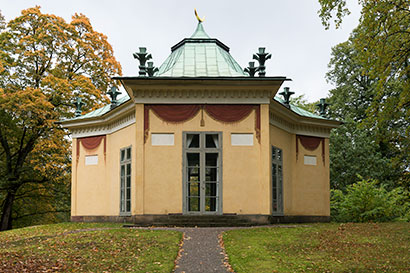 In the Turkish Kiosk, King Gustav III held secret meetings and planned the war of aggression against Russia which began after Midsummer 1788. Photo: The Royal Court 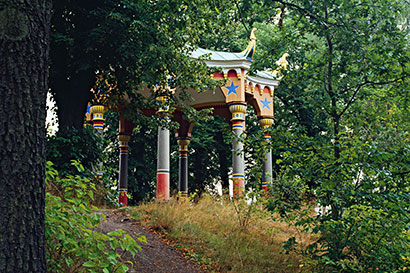 The Chinese Pavilion is an open, octagonal building with a tent-like roof ornamented with dragon heads. The pavilion was part of King Gustav III's grand plans for Haga. Photo: Jens Lindhe 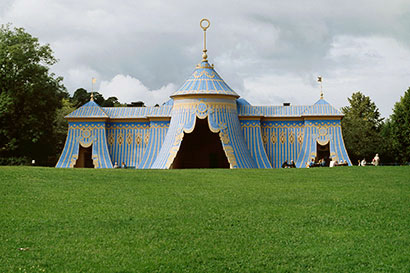 The Copper Tents were built for the guards in 1787. The façade to the south is intended to resemble a Roman army tent. Today, the Copper Tents house a café and museum. Photo: Alexis Daflos 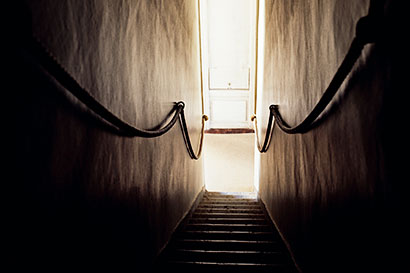 The staircase between the ground and first floors of Gustav III's Pavilion. Photo: Jens Lindhe 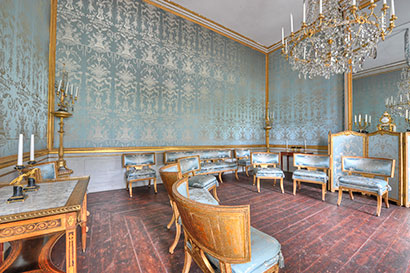 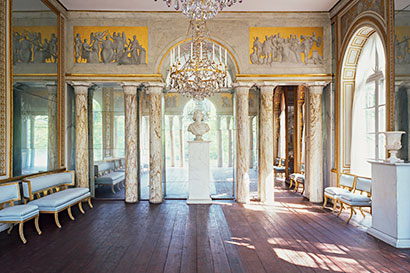 The Hall of Mirrors. The interior decoration was directed by Louis Masreliez, who had studied classical Roman art. Photo: Jens Lindhe

Jacob Johan Anckarström's mask, pistols and knives are some of the objects that were confiscated after the assassination of King Gustav III. Photo: Göran Schmidt 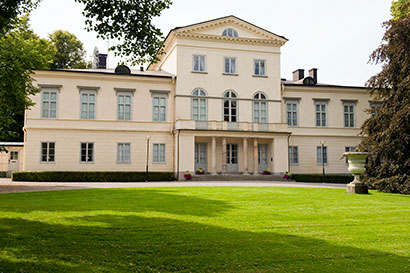 Follow along on a guided tour and hear about the Pavilion’s royal history, the history of the building itself and the preserved furnishin...

For large groups we recommend a pre-booked guided tour. Pre-booked tours can be given between June–August.

Gustav III’s pavilion at Haga is, from a European perspective, one of the most unusual royal buildings from the late 18th century. Not le...

In the summer of 1766, soon after they were married, the heir apparent, Gustav (III) and Sofia Magdalena rented Haga, a small property ju...

The Copper Tents houses Haga Park Museum and a café. Until 16 September it is also housing sale from the Royal Gift Shop.