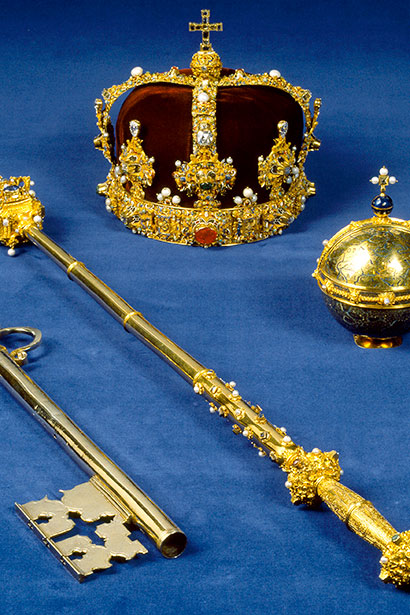 King Erik XIV's Crown is the oldest crown in the world that is still in use as a royal crown. Around the crown ring are small figures of women symbolising the cardinal virtues: Justice, courage, prudence, temperance, faith, hope, compassion and patience.

All orbs can be traced back to the globes used by the Roman emperors to demonstrate their global dominance. When King Erik XIV was to marry Karin Måndotter in 1568, he chose to decorate his orb with an engraved map of the world. The map shows oceans, ships and sea monsters.

The sceptre was used at King Erik XIV's coronation, and has been used by all Swedish monarchs since 1561. A large sapphire disappeared from the sceptre at the christening of Crown Prince Gustav (Gustav IV Adolf).

The key symbolises the king's power to shut out evil, keep in good and admit those in distress.

King Erik XIV's Sceptre
Made: In Stockholm in 1561 by Hans Heidenrik.
Material: The sceptre is made from gold and decorated with rubies, diamonds, sapphires and pearls.

King Erik XIV's Key of the Realm
Made: In Stockholm in 1561 by Peter Holtswijller.
Material: Gold-plated silver, with a handle that is typical of Renaissance metalwork.