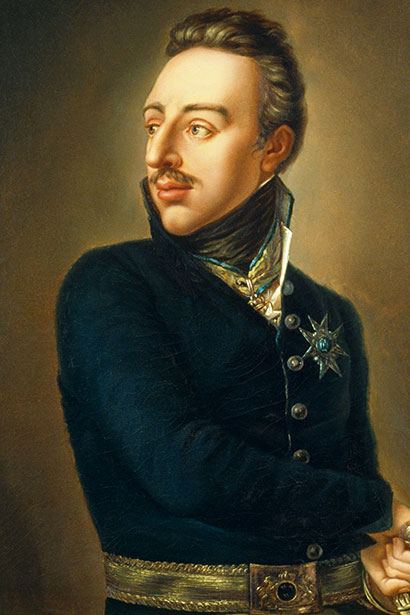 When King Gustav III was assassinated in 1792, his son Gustav (IV) Adolf was just 13 years old. The kingdom was governed as a regency until Gustav IV Adolf was able to assume power himself in 1796.

During his reign, his foreign policies were reckless and he took a position against Napoleon. This led to the Finnish War, in which Russia attacked Sweden. As a consequence, Sweden lost Finland – half the nation.

It became clear that King Gustav IV Adolf was unable to lead the country in war. His opponents decided that he had to be overthrown, and on 13 March 1809 he was arrested, deposed and imprisoned. He was then expelled from Sweden, and travelled around Europe under the name Colonel Gustafsson. He died in 1837 at a hotel in St Gallen, Switzerland.

Portrait by an unknown artist after a copy by Per Krafft the Younger, oil on canvas.