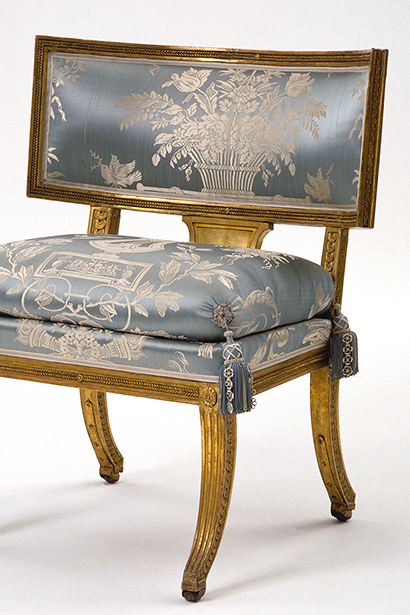 Like the rest of the décor at Gustav III's Pavilion in Haga Park, the chairs and sofas were designed by Louis Masreliez. His inspiration for the sulla chair came from the seats of antiquity: Greek klismos chairs and Roman senators' chairs.

The sulla chairs were supplied by Öhrmark, and the fine ornamentation on the frame of the chair was produced by Masreliez's brother. Instead of being carved into the wood of the chair, the ornamentation was produced in pastellage, a material made from chalk, plaster, clearcole and linseed oil that became extremely popular in the 1790s. Haga's chairs were presumably the first in Sweden to feature this decoration.

FACTS
Made by: Erik Öhrmark and Jean-Baptiste Masreliez, to a design by Louis Masreliez
Stockholm, circa 1790

Alder with pastellage decoration. Gilded. Solid stuffed back, covered stuffed edging and loose cushion on the seat. Upholstered in silk.